An under-loved Hunter Shiraz, by the fire, with a lamb burger 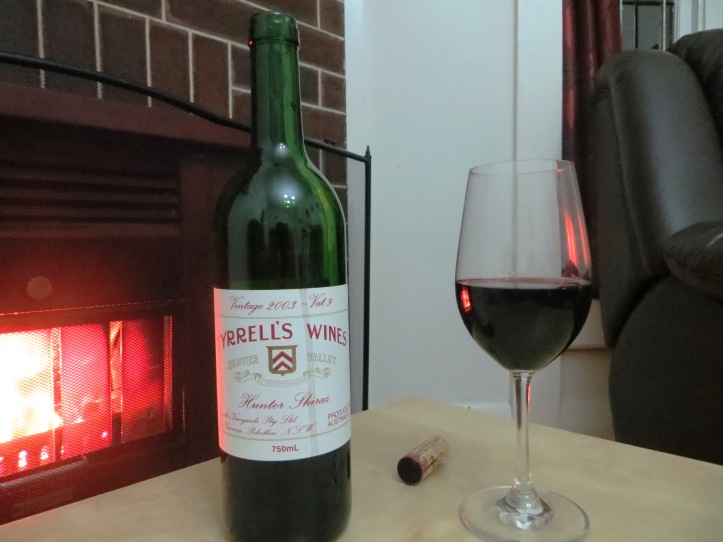 Ahhhh, the Hunter Valley Shiraz.  The poor thing has been kicked in the guts more than a dud race horse.  At one point there it was felt by many non-fans to only be the domain of the over-patriotic New South Welshmen.  Those from the southern states shunned it, and many still do, to their own detriment!  The Hunter Shiraz has changed, well not really, it has returned to its roots.

The popularity of the big juicy heavy shirazes from the South Australian wine regions meant that many Hunter Valley producers bastardized their wines trying to alter them from the deeply earthy, peppery and savoury medium bodied wines with gentle runs of mulberry and blueberry fruit into full bodied overly-oaked head-knockers that just couldn’t achieve the intense fruit flavours of the popular wines they were trying to emulate from the south.

But some producers stayed true to what a Hunter Valley Shiraz is all about, and what was once old, is now new again.  It’s back, and has been for a while, and you’d be crazy not to re-connect yourself with a Hunter Shiraz.  Maurice O’Shea, regarded as the godfather of Australian Shiraz, would be proud.

The Brokenwood Graveyard Shiraz is often regarded as the benchmark for all others to try and knock from the top.  It’s great, but I also love Shiraz produced by Meerea Park, like the Alexander Munroe, the Hell Hole, and the Terracotta, and these wines are biting at the heals of The Graveyard.  Thomas Wines makes the sensational Kiss.  And, of course, there’s the Maurice O’Shea from McWilliams Mount Pleasant.  Then there is the Tyrrell’s Vat 9. I’d recently enjoyed a 1978 vintage with my wife for her birthday. It was a lovely wine full of aged Hunter Shiraz characters and still some interesting fruit flavours, but that’s a story for another day.

I too went through a stage of dissing the Hunter Shiraz, and sucking down the biggies from the south instead (and still love them too).  But I returned to the Hunter Shiraz a few years back, thankfully.  Maybe it’s just that I too am one of those overly-patriotic New South Welshmen, but I’m ok with that, because I’ve re-discovered just how unique a Hunter Shiraz can be, and I’m at that stage where I want to enjoy wine experiences that are different rather than sticking to a preferred style. 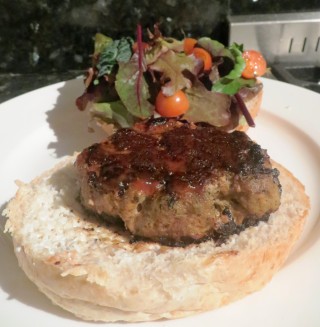 Now, I love my simple food and wine combos.  I’m also an avid veggie gardener.  We’ve had a rather mild winter here in Sydney, although it was cold over the weekend in the evenings, and I’d only just picked the last of my cherry tomatoes.  I’ve got loads of lettuce, spinach and other greens still so I decided to make some lamb and spinach burgers rolled through with rosemary, garlic, lemon and pepper, then tossed them on the BBQ. Neal had recently given me a 2003 Tyrrell’s Vat 9 Shiraz to try and he said it was a cracker.  Naturally, with my peppery lamb burger it was the perfect choice.

One thing about good quality Hunter Valley Shiraz is that it ages well and the 2003 Tyrrell’s Vat 9 Shiraz was true to form with very well developed savoury characters but not so intense that they took control.  There was lots of pepper in there, and the hints of earthiness one would expect.  There was complexity of flavours with the savoury and even leathery aspects rolling together with the dark berry fruits that still remained after ten years in the bottle.  This wine was clearly a little more fruit driven than some aged Hunter Shiraz. It had quite a bit of length with a buttery finish off the end of the palate that brought you back for another sip.

A bite of the burger with its peppery and rosemary lamb combined with the layer of Greek yogurt and a drop of fancy tomato based sauce, followed by a sip of this true to form Hunter Shiraz, created the food and wine synergy I had hoped for. And finishing it off by the fire – a great end to a simple wine occasion.

Reconnecting with Hunter Valley Shiraz has become one of my more recent wine moments! 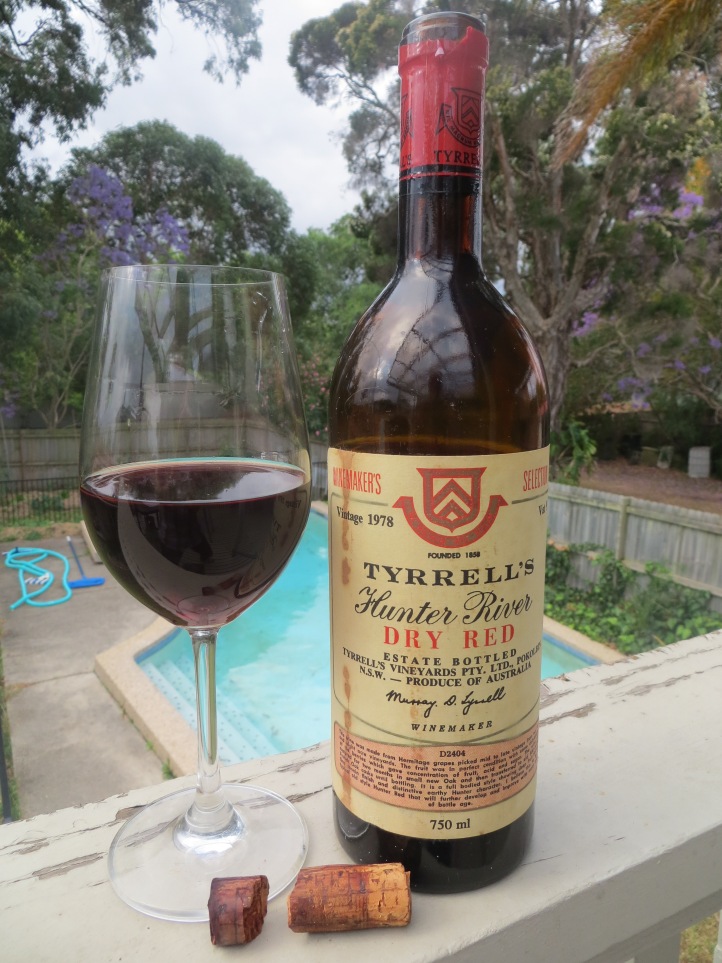 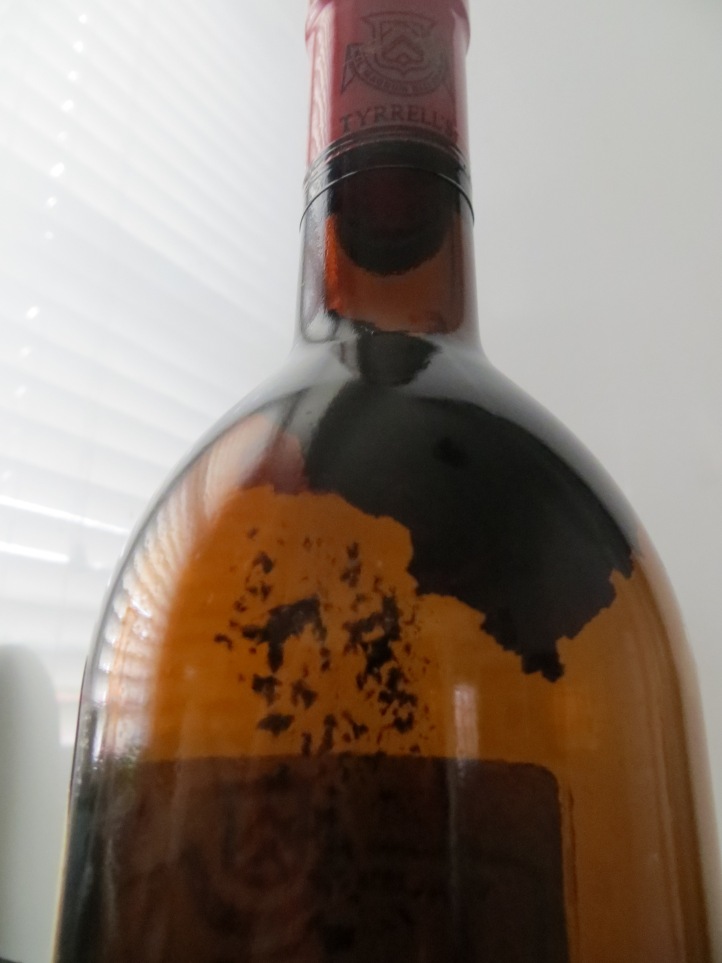 Recently I had another bottle of the 1978 Tyrrell’s Vat9 Hunter River Dry Red.  This really is a great example of aged Hunter Shiraz.  Although no doubt way past its prime it was still a very enjoyable wine dishing out all the scents and flavours you’d expect from a flagship Hunter Valley red with a decent amount of age.

You can see from the empty bottle just how much sediment had dropped out of the wine over its many years.  You could make a meal out of it!  And you can also see that it still retained a deep dark red colour in the glass.  It smelt oh so delicious with a smoky whiff carrying hints of berries and a bit of perfume.  This represented life and it made me extremely keen to get it onto my lips!

This little old beast did not disappoint.  It had clearly evolved into a more earthy, smoky and even dusty wine than a young Hunter Shiraz.  These savoury characteristics were quite complex, and there was hints of spice, all carried by enough remaining fruit to make it a rather delicious wine that lasted for long enough in the mouth to contemplate all these flavours.

Aged Hunter Valley Shiraz, a treasure if you can find it!