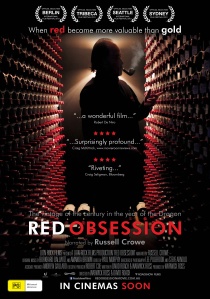 Just released the movie Red Obsession focuses on the Bordeaux wine region in France, and the fallout from recent exceptional vintages. The movie identifies the best contemporary vintages in the most prestigious Chateaus as 1961, 1982, 2009 and 2010. Brilliant vintages in consecutive years, and the emergence of Chinese demand for luxury goods, created the perfect storm driving prices to record highs. Traditional markets like the US and UK were left behind as wine prices increased to levels that, ironically, rendered these wines too expensive to drink.  More valuable than gold.

As a consequence of the First Growth Chateau’s luxury status the counterfeiting of 1982 Lafite is now apparently at the point in China where there are more bottles of the 1982 in circulation than were actually produced by the Chateau in 1982.  Empty bottles of Lafite are now fetching over $500 and wealthy consumers, when eating out, either take the empty home with them or watch while the restaurant smashes the bottle.

The story also uncovers Chinese wineries that are now producing some very special wines, one of which won a major award at Decanter World Wine Awards.  Some of these wineries are so cold in winter they bury the vines so they survive the cooler months.

The movie is in a documentary style with Russell Crowe narrating.  Interviews with the various players in the drama that evolves are very well done.  The French winemaker that claims he “hears” his wine rather than smelling/tasting it.  The Chinese billionaire that made his fortune in the sex toy industry, that goes to Christie’s wine auctions and holds his hand up while those around him bid “until the auctioneer says I have won”.

An enjoyable movie for wine buffs, with enough to keep even those not really interested in wine entertained.  It is playing at independent cinemas mostly (in Australia anyway) so seek it out if you think it is for you.