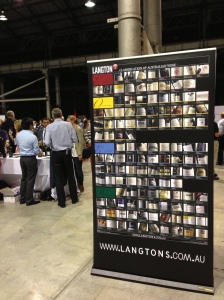 I recently had the pleasure of attending (for a $95 entry fee) Langton’s Classification Tasting Event, a tasting of 123 top Australian wines. Langton’s are an auction house in Australia that form part of the secondary market for wine, similar to Christie’s but on a smaller scale.  Conrad gives an overview of Langton’s in “The Wine Auctions“.

These guys have a classification system for the top performers on the secondary market, ostensibly ranked according to their auction performance.  Wines must also have been produced for at least 10 vintages. The  Wines are grouped into classifications from exceptional, outstanding, excellent and distinguished.

This appears to have become an annual event in Melbourne and Sydney and runs for 3 hours on a weekday evening. I point this out because after having a red hot go at tasting, I wondered whether anyone could actually taste every wine. 123 wines / 3 hours = 41 wines per hour or a taste every minute and a half (ish). In any case after an hour of this I doubt your palate could distinguish between Grange and Passion Pop.

I decided to pace my tasting to make sure I enjoyed the wines I wanted to taste, rather than try and taste everything and remember nothing.

Arguably Australia’s hero wine is Penfolds Grange and the tasting area for this was pretty hot real estate early on in the night.  I note that as the night wore on the line all but disappeared and I took great pleasure in partaking in about 4 tastings of Grange.  A strange feeling having unlimited tasting of a wine that retails for over $700.  This guy (right) is draining his glass ready for another go around.

The tasting was so overwhelming, and the standard so high, it was very difficult to find highlights.  The wines that really struck a chord however were the Clarendon Astralis and the Torbreck wines.  I suspect this is because they are both big juicy South Australian reds, which are a particular favorite of mine.  Unfortunately both are a bit expensive too so I doubt I will be drinking too much of either. 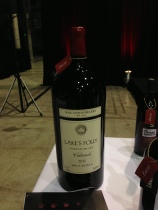 They also held a live auction on the night with a table full of current and vintage wines you could browse and bid on.  One bottle that stood out was a 9 litre salamanazar of the current vintage of Lake’s Folly Cabernet (one of my favorites).  Not sure how much it went for, would be kind of awkward rocking up at a BYO with that in tow.

For our overseas friends the Langton’s classifications are a great way to discover Australian wine, while most of it is fairly high end there are some genuine bargains in the mix.  For example in the excellent category is Wynn’s Coonawarra Cabernet Sauvignon, this is a brilliant example of Aussie cab sav and can be purchased here for around $25.  It cellars well and is sensational at about the 10 year mark.  Our reputation has been tarnished somewhat by the critter brands delivering fanta disguised as wine, tasting some of these wines will change a lot of opinions.

Anyway cracker of a night!