I had one of those “do I or don’t I?” moments with this one.  It’s the whole “Is it really blog-worthy?” or maybe more so “Can I even be bothered?”  I do know that some people really enjoy blogging all the time about everything that comes to mind, and that works well for them.

Some wine bloggers like to detail all the wine they consume, and that’s fair enough too, but that could be a lot of work indeed (not saying that it would necessarily be a lot of work for myself or anything 😉 ) 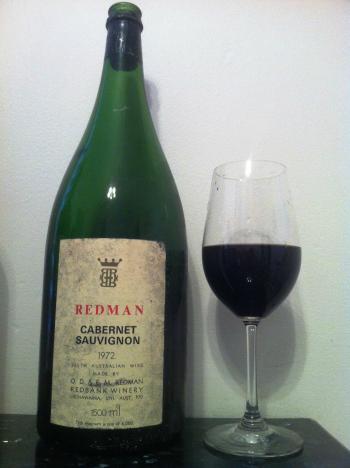 We here at The Wine Wankers prefer to write about our more interesting wine experiences that at least tell a bit of a story rather than it being a detailed description and rating of each individual wine we consume. This particular wine experience was a borderline one and very touch-and-go but in the end I saw just enough blog-worthy signs to get it over the publishing line.

A couple of months ago I picked up a magnum of 1972 Redman Cabernet Sauvignon from auction.  I blogged recently about not having much luck with the 1972 Redman Claret I had also picked up.  These old Redman wines, from Coonawarra in South Australia, seem to come up at auction quite a bit so a few people must believe them to be rather age worthy. I was hoping this magnum of Cabernet would show me why rather than solidifying a belief of “what the?”.

Over the weekend I decided to pop open the magnum… my curiosity had gotten the better of me.  And it wasn’t only that, I was cooking up a bolognese sauce and wanted to try adding an aged and character filled wine to see if it made a difference.  This bottle was the perfect choice because it meant that there would still be a lot left to drink after using it in the mix.

Popping the cork was a delicate and tender exercise.  All slow and steady so that I didn’t tear it apart.  No man-handling this baby!  But as soon as the cork was loose I was hit with fumes in a similar fashion to the failed 72 Redman Claret.  My heart sunk.  Where to tip this?  The sink?  My wife was leaning that way.

Instead I poured it into the decanter and waited a while.  A risky move with aged wines because some will just drop away into a flavourless and/or harsh liquid if left in the air for too long as they’ve already done their time with oxygen.  There was nothing to lose with this one though.  May as well give it a shot!

The change after being decanted for quite some time was astonishing!  It had dropped off the eye watering fumes and there was some good hints of fruit in there and even a bit of chocolate in the air.  So a few tips into the sauce and a few more into our glasses just for fun.

Surprisingly it turned out quite ok after all.  It was very smooth to drink, having dropped a lot of sediment over the years.  And there was a bit of enjoyable blackcurrant-like fruit in there and some interesting aged smoky and earthy characters, like leather even.  And some sense of chocolate along with a hint of olive popping up from time to time.

Did adding this wine to the bolognese sauce give it that beautifully elegant 41 year old earthy flavour that a young wine just wouldn’t have been able to deliver?  Ummmm, I could taste a bit of wine in there.  😉

The bottle lasted us a couple of nights and was even better each time, softening up further but retaining flavour.  Now it was never great and it was past its peak but it was still an interesting aged wine.  Luckily I didn’t pour this one, I was oh so close.

And why the 72s?  Because it was a great vintage of course, and a story for another day.  😉

Oh, and thanks to @zeldasydney from The Illustrated Wine who commented on my tweet of the Redman bottle over the weekend saying “Love your auction finds!” and to Daniel Redman himself who discovered the tweet and retweeted it.  A fellow wine blogger Talk-A-Vino mentioned the conundrum on deciding what to and what not to blog about, and basically concluded that you blog about whatever you want to, it’s just finding the time that can be difficult (so true).  All these signs were the final encouragement I needed to write this post.