10 things you need to know about Greek wine!

I recently attended a two day Greek wine roadshow and masterclass in Sydney where the Greeks showcased their wine under the banner of “New Wines of Greece”. Talk about bad timing though, it was held right as the recent crisis hit the poor buggers back home. I tried hard not to mention the situation because I could tell they were struggling with it all unfolding while they were away. I did chuckle at someone joking that they’d be paying for wine in Greek drachmas by the time they got home. Whoops, sorry.

1 – It’s relatively inexpensive, especially in Greece. You’ll pick up quality Greek wine in Greece for around ten Euro or even less. Twenty Euro will get you a superb bottle of wine. Above that there’s some really special wine produced but there’s often no need to be that extravagant. Oh, and you can still pick up a flagon of cheap village wine for a Euro or two, if you’re game.

2 – Greek wine is unique. Yes, some common varietals are used like Sauvignon Blanc, Merlot, Cabernet and Syrah but these are often blended with the local varieties like Assyrtiko, Vidiano, Moschofilero and Savatiano in whites and Xinomavro, Agiorgitiko, Kotsifali and Avgoustiatis in reds… just to name a few. Look out for producers like Avantis (multiple regions), Boutari (multiple regions) and Brintzikis (Peloponnese).

3 – Beautiful wine is made on gorgeous islands. If you’ve ever been to the Greek islands you’ll know how scenic they are, and how fun they can be too. Did you know some islands make great wine? A lot of Greek islands produce local wine and often from local indigenous grapes. The beautiful island of Santorini is a wine-archaeologists heaven. Assyrtiko comes from here and makes up 70% of the island’s wine production but there are varieties amongst the remaining 30% that still aren’t formally classified. Vines can be over 500 years old. You’re bound to come across something you’ve never had before on this island. Then there’s the big island of Crete with numerous local varieties on offer, like Thrapsathiri, Plyto, Vilana and Mandilari. And then there’s Robola and Mavrodaphne on the island of Cephalonia. Look out for Lyrarakis (Crete), Alexakis (Crete), Douloufakis (Crete), Gentilini (Cephalonia) and UWC Samos (Samos).

4 – Assyrtiko is the star! Although produced elsewhere in Greece, Assyrtiko from Santorini is the speciality. Critics apparently rave about this being Greece’s showcase wine and wine region and after trying some sensational Assyrtiko I can see why. A white wine that is a little rough and tough when young it soon develops a complex array of characters from citrus fruits through to hints of the tropics all carried across a mineral filled backbone. It also makes a sensational dessert wine that is just as age-worthy as the dry versions. Be careful though, they can carry a punch and are a little more expensive than other Greek wines due to their growing popularity. Look out for Argyros (Santorini), Sigalas (Santorini) and Santo (Santorini). 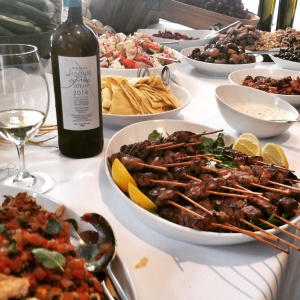 5 – Greek food is delicious and Greek wine is its perfect match. Simpler Assyrtiko is a seafood wine but I was impressed by how well good Assyrtiko goes with lamb especially if it has been drizzled with lemon. The citrus characters in the wine are what this pairing is about. The Viognier like rich apricot characters of Vidiano would make it a great wine with chicken or pork. Agiorgitiko, a red with soft tannins, would be good with lighter meat dishes and Xinomavro is for your gutsy red meats.

6 – Acacia barrels are sometimes used instead of oak. These barrels impart their own unique floral and aromatic characters without the toasty vanilla characters that oak barrels give. I tried a lovely complex Assyrtiko Sauv Blanc from Dougos (Rapsani) that beamed white flowers and tropical aromas with a nutty olive like background.

7 – The Aussies invented boxed wine, the Greeks invented Retsina. Both are ‘acquired tastes’ but there’s some seriously interesting Retsina being produced where only a dash of pine resin is added to the wine rather than it being poured in by the gallon. This ‘hint of resin’ makes for an intriguing wine. You feel like you’re strolling through a forest without the trees reaching down your throat and pulling your insides out. These wines are prime examples of the Greeks successfully adapting to a modern market. Look out for Retsina by Vassiliou (Attica) and Papagiannakos (Attica).

8 – Greek grape varieties aren’t the easiest to pronounce. Just in case you missed it, see above. Don’t let this put you off. Think of wine as an exploration and an experience. You’ll be trying something totally new.

9 – The Greek economy has its problems but none of this is reflected in the wine. I was well impressed with the wines that were on offer and I think the moniker of “New Wines of Greece” is most fitting. It’s also heartening that the Greeks are investing in their wine industry under the circumstances. And if there’s any way a winelover could help Greece out then that would be buying a bottle of Greek wine.

10 – Dionysus was the Greek god of the grape harvest, winemaking and wine, of ritual madness, fertility, theatre and ecstasy. So in otherwords, the party dude! Why did they give him up?