I was lucky enough to recently spend six days in the Piemonte region of Italy, one of the most picturesque wine regions I’ve ever been to. Think endless rolling hills covered in vineyards with hilltop villages scattered from view to view and you’re starting to get the picture. It’s a magical place with spell binding wines to match. It was hard to leave!

Piemonte, or Piedmont in the English speaking world, is a huge region that hugs the borders of France and Switzerland and stretches south almost to the Mediterranean. It seemed like I was travelling vast distances at times, possibly due to the winding hill and mountain roads, but I really only covered small sections of the Langhe, the Roero and the Monferrato sub-regions. So there’s so much more to the story of Piemonte, but at least I experienced some superb examples of the region.

Although Turin was a closer city, the budget flight from my base in Dublin flew me into Milan, and of course, the most distant Milan airport, Bergamo. This meant an almost 2.5 hour trip in my hire car to my first stop, the regional city of Alba, where I enjoyed a superb lunch ready for my afternoon tastings. From there, 20 minutes or so to the Barolo village of La Morra.

Barolo is regarded by some as (arguably) Italy’s best (red) wine and potential one of the world’s best. It’s made from the Nebbiolo grape and comes from just over 3,000 acres of select vineyards (south-ish facing) within the areas of five hilltop villages, that being, La Morra, Serralunga d’Alba, Monforte d’Alba, Barolo, and Castiglione Falletto. Nebbiolo not meeting the criteria for Barolo is often just called Langhe Nebbiolo. And Barolo itself is often called The King of Nebbiolo, so I was off to announce my presence to the King!

Reaching La Morra I drove straight to the vineyards of Trediberri where I was greeted with a head through my driver’s side window by the energetic Nicola. “Conrad!!!” I got that instant feeling of “this will be fun”.

The story of Trediberri was a story I was to have repeated to me in a similar way several times and that is the story of generational grape growers who once supplied their grapes to the large producers who were now producing their own wine. These guys know they have quality grapes and with the popularity and price of Barolo it makes sense for them to produce wine that expresses their vineyards in the best way they know it can. Trediberri have definitely succeeded in that mission.

I toured the vineyards and winery with Nicola, something he believes is of the upmost importance for wine tourists so that they can understand the regions’ wine, and then sat and enjoyed an extensive tasting of his wine. Beautiful stuff! The Barolo and Langhe Nebbiolo were full of amazing complexities and the Barbera, another major red grape of the region, was fun and very approachable.

Nicola and I headed up into La Morra village, with a bottle of his Barbera D’Alba in hand, where we grabbed a bite to eat at a popular local wine bar and eatery called More e Macine. Here I ate one of the best Lasagne I’ve ever had along with a beautiful pasta and ragu dish. Simply good! Unfortunately the day had to end and I had to check into my first two nights accommodation – Revello Wines Agriturismo in La Morra. 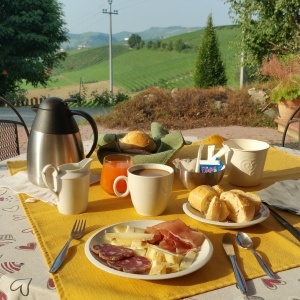 After being greeted by the lovely Revello family on my arrival the night before, and having a good nights sleep, I woke to have my first ever Piemonte breakfast accompanied by lovely views. All round delicious and a great start before heading off to their tasting room for more great views, this time paired with some magical wine. 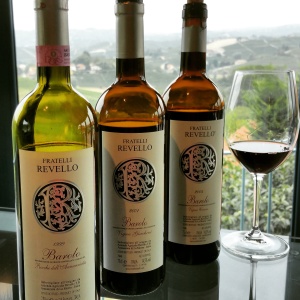 We got stuck into the sensational current vintage Barolo, Langhe Nebbiolo and Barbera D’Alba (which I was a massive fan of). Then something special happened. Enzo Revello ducked off deep down into the cellar and came back with a few bottles of aged Barolo from some of the best vintages of recent times; a 1999, a 2001 and a 2004 and all from different vineyards. I was blown away. Barolo doesn’t really start to shine properly until it’s about 10 years old or more so here I got to experience Barolo at its best and they were all oh so good! Each different but all so utterly complex and dancing with character. Almost butterfly like, beautiful but hard to grasp as they flutter around. 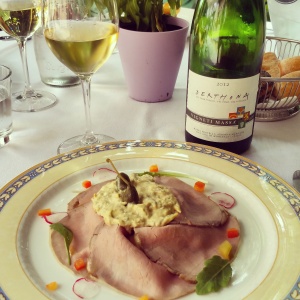 There was a downside to this; I couldn’t sit there and drink this special wine. So much more to do. It was lunch time so I headed around the corner with the Revello family to one of their favourite restaurants, L’Osteria del Vignaiolo, where the food was to die for and the wine was spot on!

After lunch I headed to the Marolo Grappa distillery in Alba. This visit was a real buzz; I’d never been to a grappa tasting before let alone a distillery so I had no idea what I was in for. Hearing nasty tales of grappa in the past I wasn’t expecting much, and I’m so glad that was the case because this place blew me away. Marolo make scores of different grappa from the numerous batches of grape pomace sent to them by wineries across Italy. It’s a spirit, something like whiskey, but each grappa takes on some of the characteristics of the grape it comes from. If you’re a liquor lover you’ve got to find yourself some grappa from Marolo!

I was picked up in the evening by the lovely Maja from Perché No! who took me to a tasting at Josetta Saffirio near the hilltop Barolo village of Monforte. Sara from Josetta Saffirio brought out wine after wine while we casually sat around a grand table chatting. The Barolo was good, of course, as was the Barbera, but I especially loved the sparkling Nebbiolo Rosè. After sitting around for ages enjoying wine and company we headed up in Monforte for a bite to eat and a few drinks. My arm was twisted, and it wouldn’t be the only time.

Two days of six done and it’s a mind blowing start! Check out how things pan out by clicking here…

A big thank you to Valerie Quintanilla from Girls Gotta Drink and Christian Canala from La Cantina for organizing these visits. Valerie’s tour organising skills are exceptional. The wines of Revello, and the grappa from Marolo, are imported into Aus by La Cantina.