Vinomofo and their Collaborative Dozen

When it comes to radical wine names and label design, Vinomofo wins hands down with the ‘Vinomofo Collaborative Dozen‘ by their ‘Kinda Independent Wine Company’. What began as just a bit of fun has now turned into some serious wine offerings, with fun still very well attached. Sounds totally familiar! 😉

Vinomofo was founded by brothers-in-law Andre Eikmeier and Justin Dry in an Adelaide garage in 2011 and is a members only online wine sales site. They were a few days out from registering as Vinomojo when they received a “cease and desist” letter from someone claiming to already own it, so over a few drinks (and probably a few more) they came up with the more daring Vinomofo, and the rest is history. Fate has worked in their favour! They’re going from strength to strength and now have plans to take on the world.

Vinomofo focus on quality over quantity. Only 5% of wines that make their way to the tasting bench are actually sold on the site. These are the wines they love. Their offerings range from boutique producers/hidden gems to big name producers and may at times be up to 70% off normal retail price. They are ‘no bowties and no bullshit’ and believe in taking the elitism out of wine. They want everyone to be ‘United by Wine’ and believe everyone should be able to enjoy awesome wines without paying an arm and a leg. We can totally relate to all of that!

The guys from Vinomofo have collaborated with some Aussie wine legends to create these wines, picking wine regions known for producing great wine styles. On top of the effort crafting the wine, Vinomofo has designed some crazy labels via their creative Art Director Adam Trovarelli (aka @adam_monster). All this comes together at less than $15 per bottle! There’s six wines with two of each in the case.

Bisou Bisou Yarra Valley Blanc de Blancs NV – Meaning ‘kiss kiss’, this is a blend of four vintages made from Yarra Valley juice by De Bortoli wines. Vinomofo say that these bubbles “pucker up with lemon zest, Golden Delicious apple and softly alluring spice”. There’s a bit of naughtiness on the back label. 😛

Fanny Limehead Clare Valley Riesling 2015 – Yes, “interesting” name, but it describes this citrus driven wine well. As Vinomofo put it “she’s perfumed with intense lemon, lime and a hint of musk”. Crafted from Watervale and Polish Hill River fruit by Penna Lane. There’s a beautiful loveletter on the back label from ‘Dick Lemonbottom’. As you can imagine, this one received some interesting comments on our social media like “You couldn’t make it up … They clearly did … #inspiredlabel” That’s Vinomofo for you!

Arcadia Bohemia Yarra Valley Chardonnay 2015 – This is cool climate Yarra Valley juice made by Innocent Bystander. As put by Vinomofo “The dream starts with vibrant citrus and grapefruit notes, with lashings of pear and pineapple”.

Art of War Barossa Valley Shiraz 2014 – Made from Barossa Valley fruit by Kym Teusner, as Vinomofo describes, it’s a “battalion of blueberries, blackberries and violets that overwhelm the senses”. We got numerous comments about this one on our social media and people really love the artwork. There’s something sneaky and fun hidden on the back label too.

Old Money Coonawarra Cabernet Sauvignon 2013 – This was the most popular wine on our social media. The label is so much fun. It’s “soil grown”, “single vineyards”, “relatively small batch” and “hand crafted (in theory)”. But otherwise, it’s serious Coonawarra Cabernet! As Vinomofo say, it’s “showcasing ripe, vibrant mulberry and blueberry fruits, this is intense, juicy and opulent. Dust off your smoking jacket ‘cause we’re hitting the Chesterfield with this one”.

So who wants to win some fun wine? 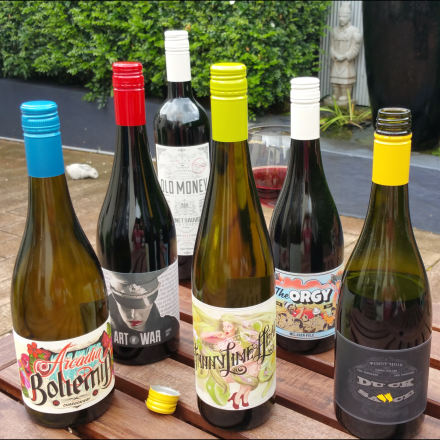 To enter, keep an eye on our Instagram feed (@winewankers) over the next 24-48 hours, and follow the instructions. Unfortunately, this is only valid for people residing in Australia (excluding the Northern Territory), well this time anyway. Who knows what the future holds with Vinomofo’s planned expansion across the globe. Oh, and of course, it should go without saying, you need to be over the legal drinking age to qualify, that is 18+ in Australia!

Disclosure: The Wine Wankers are working in partnership with Vinomofo to promote the Collaborative Dozen and to run the giveaway. As per our Promotions Policy, we do not give any serious opinions of our own on these wines but we’re sure that you’ll enjoy discovering them yourselves!