Half-bottles are a bit of a tease!

When I heard that we were receiving some wine from TarraWarra in the Yarra Valley I was pretty excited.  This is a winery with a solid reputation for producing sensational wine especially Chardonnay and Pinot.  So there was a bit of anticipation for the actual arrival of the wine and this built up over quite a few days until the wine eventually arrived, thankfully!  Talk about expectations!!

The Yarra Valley is one of Australia’s 72 wine regions and it sits right on the edge of one of our biggest cities, Melbourne, so it’s a major tourist destination especially for those little weekends away.  Whenever I go to Melbourne I try and squeeze a couple of extra days in so I can get out into the Vineyards (well more like sink some decent wine at the cellar doors).  Fellow Wine Wanker Neal was there not too long ago and became a big fan after visiting the likes of Dominique Portet, Oakridge Wines, De Bortoli, Domaine Chandon, Yering Station, Coldstream Hills and Yarra Yering (with which he really fell in love with). 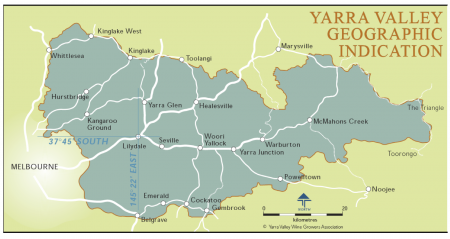 The Yarra Valley is a cool climate region meaning that they produce Pinot and Chardonnay with finesse resulting in subtle but quite complex wines.  You could say that what comes out of the Yarra Valley is at the opposite end of the “heavy weight punch” scale of the Barossa Valley or McLaren Vale even.  What they lack in brut force they make up for in sophistication (now I’m sounding like a real wine wanker).

The climate and soil of the Yarra Valley is also regarded as one of the best places in the world to make “champagne style” wine ie bubbly made exactly like Champagne with the same grapes and processes.  For this reason, Moët and Chandon has a winery in the valley, Domaine Chandon.

TarraWarra first planted vines on 10 acres in 1983 and have grown many times larger than that over time, gaining a solid reputation for producing some of the countries best Pinots and Chardonnays along with some other interesting wines including a cool climate Shiraz (again, putting it at the opposite end of the scale to those big Barossa Shirazes).  So with all this reputation behind it I was eager to see what wine I’d scored for tasting.

The wine arrived and I opened it with anticipation.  It was two half bottles, one being the 2012 Reserve Pinot Noir and the other being the 2012 Reserve Chardonnay.  2012 was an excellent year in the Yarra so I was ecstatic that I was going to get to try their two flagship wines even though only in a small dose.  Being a passionate wine drinker rather than a wine taster, I would have loved to have tucked into some full bottles but hey, at least I was getting to try some of it which I’m thankful for.  It was still a decent sized glass each for my wife and I.

First up was the 2012 Reserve Chardonnay that we paired with a mildly flavoured chicken and rice dish and fresh veggies from our own patch.  On the sniff it seemed quite restrained, definitely not overpowering.  I was getting some hints of stone fruit along with the scent of subtle oak.

On the sip it instantly displayed its complex nature, in its own subtle way.  There wasn’t just the fine Chardonnay stone fruit flavours; there was also a delicious lemon background that carried over the fine oak, and I could sense the toastiness that this wine would eventually develop.  The weight of acid in this one carried the flavour long and it will probably cellar for many years.  Being an aged wine fan I’d love to come back to it in a decade or so.  It really suited the dish we were eating.  This one retails for about $50 and a critic or two have said that it may be Australia’s best Chardonnay at the moment.

Next up was the 2012 Reserve Pinot Noir, a wine that James Halliday gave 97 points to.  Not many wines receive scores that high so my expectations were also high.  Did it live up to them?  You betcha!  This is the wine that appears in the top photo so you would think it’s a very light Pinot … but it wasn’t.  This was a power-machine full of goodies.  The aromas jumped out at me straight away, hugging my face and pulling my nose into the glass.  Beautifully complex with flavours of plum, raspberries and some fresh strawberries, even a bit of lemon zest in there, all tied down by a great acid and tannin structure.  Then there was a touch of “berries with cream and light chocolate sauce” finish that just lasted in the mouth, and lasted some more.  This one retails for about $60.

To me, both these wines could do with some age before they really express themselves properly.  You get how good they are now but you can tell that it’s only a hint of what they will become.  And geez, half bottles of wine this good are just a tease!  They’re a snack for one but I always share if my wine loving wife is there.

A consolation did end up coming along though.  After seeing our tweets and photos of the wines on social media TarraWarra sent us a bottle of the 2012 Estate Chardonnay and 2012 Estate Pinot Noir, ie their non-Reserve wines.  And these were full-sized bottles meaning we could give these ones a really good go!

At $25 the 2012 Estate Chardonnay is half the price as the Reserve but it’s way better than half as good.  This is a modern style Chardonnay, full of zest and life that just dances in your mouth.  Lots of melons and stone fruits and even hints of pineapple all carried along by subtle oak and an enjoyable slight nuttiness … a really well balanced wine.  It’s a similar style to the Reserve but still very different.  If it’s too much coin to shake for the Reserve you won’t be dissapointed in this wine as an alternative.  And to be honest, although the Reserve will grow into a far better wine my wife found this one more immediately approachable.  It would probably go down for a fair few years too and develop itself over time. Great value!

The 2012 Estate Pinot is also $25 and it too is way better than half as good as the Reserve.  This is another value for money wine.  It packs a serious array of scent and tonnes of flavour for a Pinot in this price range.  The only real technical difference between this and the Reserve is the parcels of grapes and selection of barrels used to make the wine.  There’s a lot of spice and pinot tang in this wine, along with cherries and raspeberries and a bit of nutty grainy finish that lasted quite a while in the mouth.  Not as much acid mouth-feel which means it probably won’t develop as intensely or last as long as the Reserve but there’s a few years in there at least.  Again, great value.

I may have been teased by the half-sized bottles but it was all worth it in the end!