The boys on a road trip to Orange; shiny happy people

“Shiny people”… what the? It apparently describes the likes of us, read on to find out why.

We have just returned from a road trip to the Orange wine region about 250km west of Sydney. This is a spectacular corner of our great country and spending time there in the crisp autumnal weather, surrounded by a display of nature’s amazing colours, was truly a great wine experience.  Although maybe common to our European and American friends it’s a sight us Sydneysiders don’t see much of.  We prearranged visits to selected wineries, spending almost 2 hours at each of them. Rather than attempt to squeeze too many in we decided to spend more time soaking up the vibe in preference to ticking off some numbers.

Orange is one of Australia’s 72 wine regions and was first planted at what would become the Bloodwood vineyard in the Spring of 1983.  This makes it a relatively new kid on the block, but it is fast becoming a region renowned for producing wines of elegance and finesse.

This area is a traditional fruit bowl and grapes are grown from altitudes of around 600m all the way up to over 1100m.  This causes a lot of variety in the wines and wine styles, and it also means that there can be a lot more variation from year to year than many of Australia’s other regions.  One vintage can, potentially, create some of the best and most long-lived Australian wines followed by a vintage that hardly leaves the winery.  On top of all this the soil ranges from poor gravels to rich volcanic dirt up the side of Mt Canobolas.  There’s a school of thought that believes the reds fair better lower down in the gravels and the whites up in the rich soil, but we heard so many differing thoughts over the trip.

Now our significant others could not join us for the weekend due to other commitments so we were stag for the weekend. In line with such pursuits we decided that we should stay in a pub rather than the swish accommodation we would have otherwise stayed at had our wives joined us. This turned to disaster somewhat on the first night when we perhaps experienced our most challenging accommodation to date, most of the detail a bit difficult to explain on a family friendly blog such as ours. Suffice to say we changed hotels and ended up at The Parkview Hotel on the second night. This is a cracker of a pub with very clean rooms, very quiet, civilised clientele and excellent breakfast; in direct contrast to the prior nights experience.

On our way out to Orange we decided to stop at Mt Panorama Wines.  This cellar door is actually in Bathurst, about 50km short of Orange, and not part of the region.  The reason we stopped off was because of this blog post of Conrad’s and that they had recently started following us on Twitter and on Instagram.  It was a great way to break up the trip.  We were impressed with their 2013 Revolutionary Thinking Riesling, which had notes of citrus and a honey-like finish that lingered, and their 2008 Chardonnay that was showing a lot of buttery and toasty aged characters and still a decent array of fruit to back it all up.  If you are in Bathurst make sure to drive up to the racing track and pop in and see the very hospitable Trent as you make your way up to Mountain Straight. 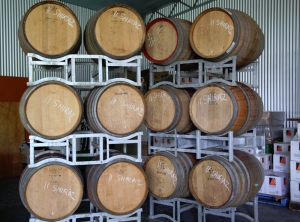 First winery visited when we got into Orange was Orange Mountain Wines and we were taken around by the owner and winemaker Terry Dolle. This is a boutique outfit that buys fruit locally, and some from warmer areas just outside Orange, to make some of the regions most spectacular offerings. Terry has an old horizontal hydraulic basket press date stamped 1960 that he has used to make all his wine. This thing looks more like a jet engine than a press (and has been mistaken for one).

Terry’s passion for his craft is infectious and we tried everything he has in barrel and bottle.  If he had more he would have happily offered it. Keeping his production in sync with demand is key to the financial success of this winery, with most of the wine sold at cellar door and some into the emerging Chinese market. The highlight here was the 2012 OM 1397 Shiraz Viognier, and by highlight we mean bloody spectacular. This wine has a beautiful perfumed aroma accentuated by the Viognier, a fine-grained savoury cool climate beast of a wine that smelled like a beautiful woman. Terry thinks this one might be his best yet, and we think it is as good, if not better than, the most highly rated Shiraz Viognier in the country. We have opened a bottle of it with friends since and they supported up our opinion. 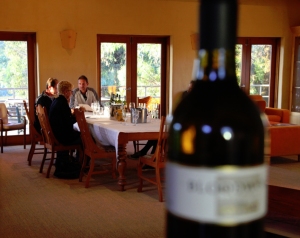 Next up was Bloodwood Wines where we were hosted by the legendary Stephen Doyle in a tour of the winery, with his wife Rhonda conducting the very informative tasting.  When we told Terry from Orange Mountain that we were off to visit Bloodwood his response was “Stephen Doyle, he’s the man!”.

This is the first vineyard of modern times planted in the Orange area rendering these guys the pioneers of the Orange wine region. Stephen and Rhonda started the winery in very modest dwellings (a tin shed) in 1983 on very ancient gravelly ground with excellent drainage.  Stephen spent a lot of time meticulously researching (he’s like that) the best location to grow grapes and this was it.  The two of them lived in their tiny shed for quite a few years until their commercial success meant they could upgrade to slightly bigger digs.  Their tasting room is now in their lounge room.

The success of the wine they produce is a testament to the time and effort taken to find a suitable location for their winery. We got to sample an array of sensational wine, including their amazing Chardonnays, but the highlight here for us was the Maurice, a tilt to Maurice O’Shea, a legend in the Australian wine industry. This is a red blend that varies year on year depending on what is going well, a lovely fine-grained wine with a lot of character and length. Very typical cool climate pepper but suitably restrained.

On day two we headed out for a rather early appointment with Ross Hill Wines.  Even for us it just feels a bit weird drinking wine at 10am. You don’t want to have just brushed the fur from your teeth after a late night! A big no no. Anyway…

One of the owners of Ross Hill, James Dobson, and his assistant winemaker, Scott Burke, spent over 2 hours with us showing us through the working winery and generously pouring out a load of wine from both barrel and bottle. This was the biggest operation we visited.

The winery is situated up around 1000m on the mountain where they grow a lot of their whites. Interestingly, a lot of their reds come from right next door to Bloodwood down on the ancient gravels. Kudos to them as it was an extremely busy morning on the cellar door yet they made sure we were looked after.  Seems a lot of people like wine tasting before lunch time!

We were really impressed with their wine from Sauvignon Blanc to Chardonnay and Riesling with several other white varieties in there too.  Numerous reds were offered up including the cool climate spicy Shiraz that Orange is known for and the Cabernet blends. Their Pinnacle range was all sensational, the Cabernet Franc being a stand-out.

Next up we visited Murray Smith from Canobolas Smith Wines.  Wine makers are generally very interesting characters and Murray is right up there.  He works the cellar door in his “character filled” overalls and brings a real essence of authenticity.  He is one of the region’s pioneers who set up on the north slopes of Mt Canobolas in the mid 80s.

When we first arrived he was busy with people at his cellar door.  So he just handed us a few bottles of wine and basically said “help yourselves fellas”.  Now most people would love the chance to go nuts with such good wine but we had a lot to get through and were after some discussion.  Anyway, we weren’t left alone for too long.  As soon as he was free Murray took us into his winery and enthusiastically through his barrels. He does beautiful Chardonnay, Cabernet blends and spicy cold climate Shiraz. Most wines get released with a few years of age.  We had heard from other wineries that the Orange wine show was jokingly referred to as the Murray Smith wine show because he took out so many awards.  You get the real deal with this winery.

We also visited the cellar door of Swinging Bridge who are located in the grounds of the Union Bank bar and restaurant in town.  This tasting was unplanned and we knew very little about this producer, but a cellar door is very hard to walk past for us; so in we went.  These guys are actually from Canowindra, about 45 minutes from Orange in a warmer area.  Their reds are primarily from Canowindra while their whites are primarily sourced from grapes in Orange.  We loved their Chardonnay but the highlight was the 2011 Swinging Bridge Reserve Shiraz, lots of lovely peppery fruit flavours, delish.

So, to finish up, “shiny people”. As with many wine people the Wine Wankers like nothing more than to finish up with a cleansing ale at the end of a hard days toil in the world of wine. We met some of the locals in the pub on our last night and they explained the concept of shiny people, which to these guys was local lingo for folks from out of town. They spotted straight away that we were from Sydney (so they claim) because we were shiny, huh. Shiny is well groomed, well dressed with a slightly different pronunciation. We thought it was hilarious, but of course, we aren’t all that shiny… are we?