The boys catch up for some good wine

Earlier this year Ben and I attended a Qantas epiQure wine night and our favourite wine of the evening was the 2011 Rosabrook Single Vineyard Estate Cabernet Sauvignon.  We got talking to Amy of the Calneggia family who owns the winery and after giving her our verdict, and telling her that we loved wine with a bit of age, she said that she would send us a few different vintages of the Cabernet to try.  And true to her word, 3 vintages of Cabernet arrived on my doorstep along with a Chardonnay and a Tempranillo and all of these were from their prestigious Single Vineyard Estate range.

Rosabrook are one of the pioneers of Margaret River which is one of Australia’s 72 wine regions.  The region is located in the south western corner of Western Australia and is known for producing some of Australia’s best Cabernet Sauvignon as well as some of our best Chardonnay in a style that is often both rich and elegant.  It also produces some great Cabernet Merlot and Semillon Sauvignon Blanc blends.  I was excited by these wines but there was a lot of rep that they had to live up to.

One of the great things about this wine caper is that it encourages us to catch up with friends because we’ve got a little bit more wine to drink nowadays and sharing good wine is all part of the pleasure.  In the case of these wines, although tempted, actually very tempted, I couldn’t drink them without Ben being part of the experience.  I think Ben could sense my weakness so he organised a catch up at his place so we could enjoy these over a good feed.  Just in time! 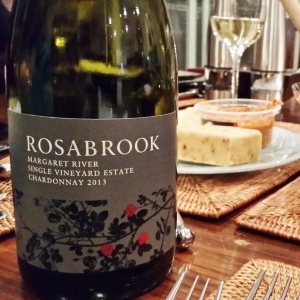 First up we had the 2013 Rosabrook Single Vineyard Estate Chardonnay and we paired this wine with various cheeses, crackers and dips.  What a great start to our little drinking session.  On opening there was a beautiful whiff of stone fruit that seemed to hang over a bit of pepper and spice making this smell very interesting indeed.  On sipping the wine you immediately got beautiful stone fruit flavours that sat on top of a complex savoury and earthy dry backbone and the finish on the wine was long and luscious.  You could feel the gentle acid around the side of your tongue, a sign that this wine would age and develop further complexity for quite a long time.  I would love to try this wine again in a few years.

Next up we cracked open the 2012 Rosabrook Single Vineyard Estate Cabernet Sauvignon.  The aromas on the nose with this one were very inviting and drew us straight in.  There was an array of berry scents along with the beautiful smell of cedar.  On drinking this wine we all looked at each other and gave a nod and a “yep”.  The flavours in the wine were complex and they just sat and sat on the tongue after each sip.  The dark fruits blended in well with a general toastiness and there was nothing harsh in the wine at all.  Like the Chardonnay you could sense the acid content so it too would last for many many years.  My only complaint is that I’m not drinking it at 10 years old.  We paired this with a beautiful saucy meatball dish Ben had whipped up.  Just perfect! 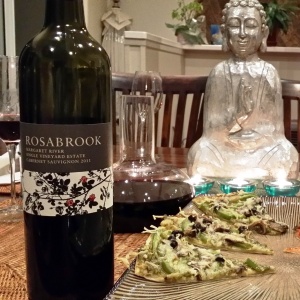 Next was the 2011 Rosabrook Single Vineyard Estate Cabernet Sauvignon.  Now this wine had a lot to live up to, it was our favourite wine of the Qantas epiQure event so we were expecting it to shine.  So did it deliver like it did the first time we tried it?  Of course it did!  Although nowhere near as fruit driven as the 2012 it was a complex wine that gave off beautiful cedar and earthy aromas and finished on each sip with a lovely piece of cinnamon toast.  We had this one with a pesto based pizza which ended up being just perfect due to the savoury notes in both the wine and the food.  Yum!

We then popped open the last of the three Cabernets, the 2010 Rosabrook Single Vineyard Estate Cabernet Sauvignon.  I unscrewed the top and wow!  The aromas on this one were even better than the first two.  There was a beautiful balance of fruit, spice and earth in the air.  It made you want to tuck right in.  And that we did!  The berries and dark fruits were in abundance and were tied together with cinnamon and savoury earthy characters that lasted for ages after each sip.  This wine ended up confirming that we love Cabernet outta Margaret River and that Rosabrook are a fine producer.

Interestingly it wasn’t the 2011 that was the favourite Cabernet on this day, we were equally split between the 2012 and 2010.  In other words, we’d scored all around!

The last wine up was the 2012 Rosabrook Single Vineyard Estate Tempranillo.  Being a little different for the region, and also being Rosabrook’s first release of this wine, I was intrigued.  Had they pulled it off?  Well I reckon this wine could well have impressed me more than the Cabernets.  As soon as I opened it I was hit with a beautiful array of fruit aromas and a strong hint of vanilla and cedar.  In the glass it was a deep purple and on the sip it was very complex with dark fruits combined with loads of spice all riding across a very obvious backbone of vanilla and oak.  A very well balanced wine indeed and one with the tannin structure to last many years.

It was a great afternoon and we really did enjoy these wines.  I can’t complain about the wonderful occasions that this wine caper is brings about.