Fellow wine wanker Neal invited us over to his joint for a dinner party over the weekend.  He and his wife whipped up some beautiful food, they are both quite the home cooks, but it was the wine Neal brought out that was the real highlight.

Thankfully Neal shares a similar philosophy to myself… that great wine needs to be shared with others who will really appreciate the experience rather than kept to ones self.  Neal’s line-up was an utter sensation, some of the best wine I’ve ever drunk! 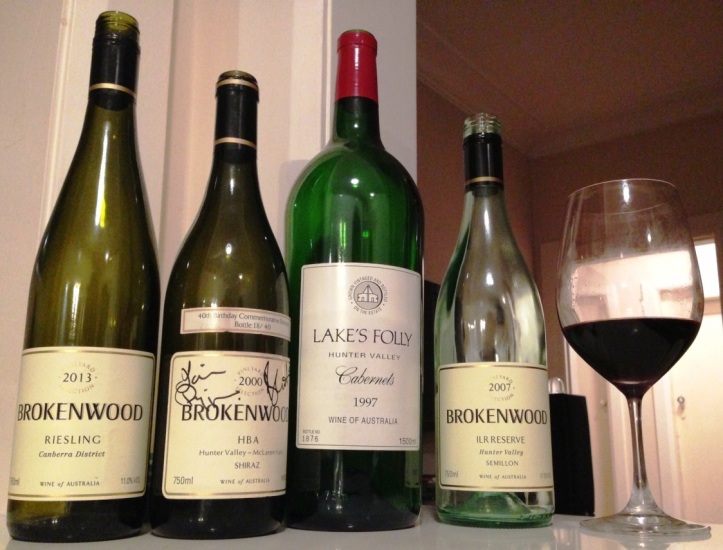 Neal is a big Brokenwood fan, and he has definitely got me on the bandwagon of late too.  Brokenwood are one of the Hunter Valley’s best producers and as well as their flagship Hunter Valley wines they produce premium wines from other Australian regions aswell as multi-region blends.  So all but one of the wines we drunk were from Brokenwood. 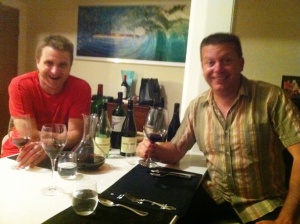 First up was the 2013 Brokenwood Riesling from the Canberra wine region, a wine region located in the surrounds of Australia’s capital city Canberra and gaining recognition for some exceptional cool climate wines including the highly revered Clonakilla Shiraz-Viognier.

This Riesling was so crisp and dry, the opposite of sweet.  It still had loads of fruit coming through though, especially citrus and limes.  There was not much kerosene notes at all, due to its very dry style, and relatively low alcohol of only 11%.  It even reminded me a little of Hunter Semillon due to these qualities.  Acclaimed Australian wine writer James Halliday gave this one 96 points.  Well deserved and I’d love to come back to it in another 10 years time.

Had with a tasty chicken liver pâté encased in butter and atop some crackers.

Next up was the 2007 Brokenwood ILR Reserve Semillon from the Hunter Valley.  This wine has only just come out, as a museum release, and was given 98 points in James Halliday’s 2014 Wine Companion and named the best Semillon of the year and the highest rated white wine.  It’s hard to describe how good it was.  Luminous green in colour with so much lemon and lime flavour and great length, it just lasted and lasted in the mouth.  And it was well and truly developing the toasty buttery characters of aged Semillon, but still has a long way to go.  Give me a bottle of this in 20 years time please!

Hunter Semillon is rather special and I recently blogged about it here.

Had with a delicious salmon ceviche cooked by soaking in the juice of oranges.

2 bottles down, both being relatively low alcohol, and shared between enough of us to keep me totally sober!  Where’s the rest Neal?  😉 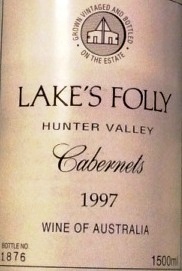 And then out came a really special wine, a magnum of 1997 Lake’s Folly Cabernet’s from the Hunter Valley, the only non-Brokenwood wine we had.  Neal recently blogged of the benefits of the 1.5L magnums over the 750ml standard bottle size.  And this wine still seemed so fresh after 16 years.  It was an utter delight.  As soon as I smelt it I knew it would be good and the flavour didn’t let me down.

This wine received 94 points from eRobertParker.com in 2011 and was well described as “The 1997 Cabernets is composed of 72% Cabernet Sauvignon, 11% Shiraz, 10% Petit Verdot and 7% Merlot. It has intense notes of warm plums, blackberry preserves, dried mint, toast, underbrush and a whiff of roasted nuts. Crisp and very concentrated, the medium-bodied palate reveals an elegant style with great finesse, silky tannins and a very long savory finish.”  A truly exceptional wine and ranked as one of my best ever.

So when I thought nothing could beat the Lake’s Folly magnum Neal brings out a 2000 Brokenwood 40th Birthday Commemorative Release HBA.  To say this is a special wine is an understatement.  I actually think we weren’t ever meant to open it and many a collector would be screaming.  Oh well, all wine is there for the taking, and luckily Neal is also of this philosophy.  The HBA is a blend of Hunter Valley and McLaren Vale Shiraz and is probably the top of the top of Brokenwood’s range.  Only 40 bottles of this were made, this being bottle 18.  And signed by the chief wine maker Iain Riggs.

This wine is quite possibly one of the best wines I have ever drunk.  I can never say any wine is actually the best because past wines are just memories, but I’d love to line a few of them up together.  It was like drinking the best Christmas cake you’ve ever had, then still having the yummy flavour in your mouth 10 minutes later.  As I took one sip Neal ducked off to the loo.  When he eventually returned I said to him “I can still taste this since I sipped it before you left the table”  It was total wine heaven in a bottle!

Had with a delicious rack of lamb and a seriously fancy potato bake.  Perfect!

5 bottles down, now we’re really talk’n (possibly some crap too).

Hard to top the HBA, but Neal gave it a good go bringing out the 2010 Brokenwood Quail Shiraz, a blend of McLaren Vale and Hunter Valley Shiraz.  It is essentially a younger version of the HBA but with McLaren Vale dominance.  This wine comprises the best grapes from McLaren Vale’s Wade Block 2 and the best of Brokenwood’s Graveyard Shiraz grapes (The Graveyard produces Brokenwood’s flagship wine).

Neal’s wife once described this particular wine as the best wine she’d ever drunk.  And if it wasn’t for the HBA and the Cabernets it probably would have been one of mine, it’s definitely up there.  Beautiful dark cherry and berry flavours from McLaren Vale showing through with a great hint of Hunter spice and earthiness, along with smooth vanilla and chocolate.  And like the HBA, it was long lasting in the mouth.  Devine!  Give me another bottle in 15 years time please.

6 bottles down and it’s borderline, but we’ve got dessert and it deserves a good wine!

Lastly, we downed a great bottle of 2008 Brokenwood Indigo Vineyard Viognier from Beechworth.  The flavour of dried apricots was very noticeable, and although not overly sweet, it did go quite well with the Raspberry soufflé.

7 bottles down!  I could have been tempted to join in for just one more bottle, it may well have been worth the extra sore head the next day, but my wife and I had to hit the road (public transport of course) and get home to the babysitter and kids at a relatively decent hour and with at least a semblance of being coherent. 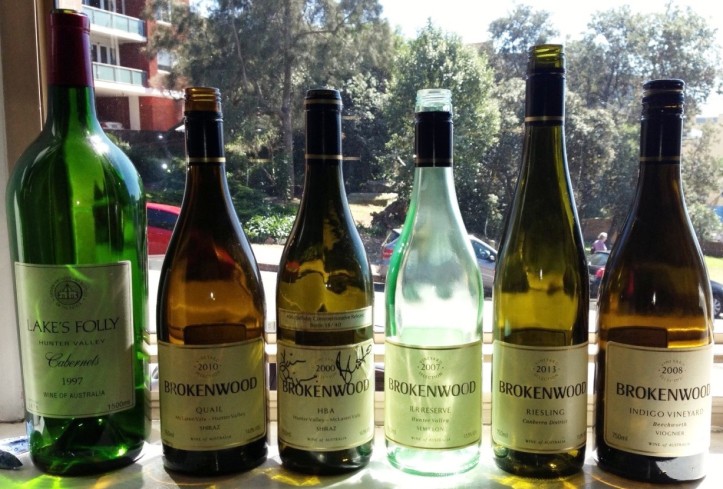 Thank you Neal and Melissa for a great food and wine experience!

You may be able to source some good Brokenwood wines in your own neck of the woods… http://www.brokenwood.com.au/Footer-Links/TradeMedia/International-Distributors/